I am so happy to have braved up and figured out the scorpion's outer ring. It's my new happy place. The inner fire? - eh, it's just not enough, and I was beginning to think I'd made a mistake buying that thing... but then I turned on the outer ring, got the perfect flame almost instantly and have been convinced ever since that I got the right torch. It's big, yes, but that's what I needed. Fine control for stringers? I'll figure that out too, but for now all I'm playing with is Kalypso - and look! I got the bright juicy colors again! 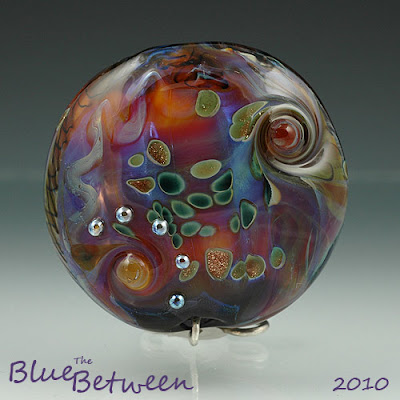 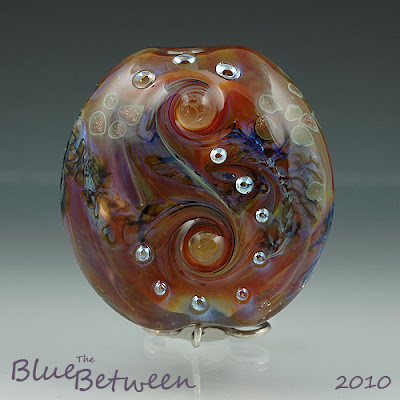 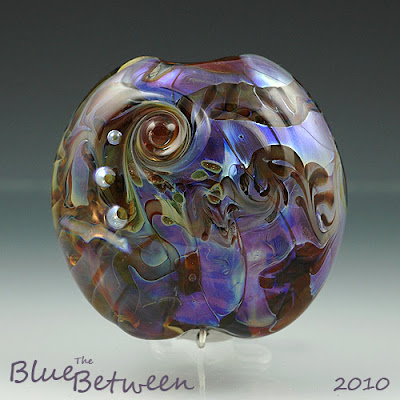 Posted by Pam @ The Blue Between at 4:17 PM 3 comments: Links to this post

Got the new torch hooked up yesterday - once I learned the dunk-the-hoses-in-scalding-hot-water trick, it went pretty smoothly. OH my goodness! Check it out! 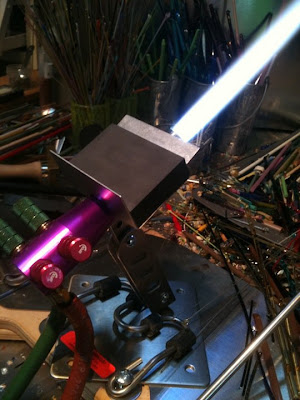 That's with both rings burning - it's HOT. I managed to make three new beads with it, but I will admit, I was a little afraid to use the outer ring - as it is, I seem to be loosing some of the magical Kalypso pinks with just the center flame. I may need to crank down my propane a little to get more pressure - or just work a little cooler... not sure. Need more experimenting time!

Here are the new beads - all hearts, though... you might not know that about one of them if I hadn't told you. 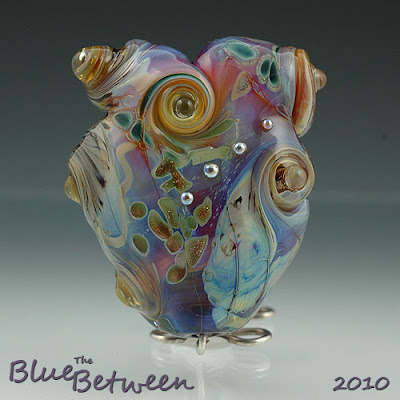 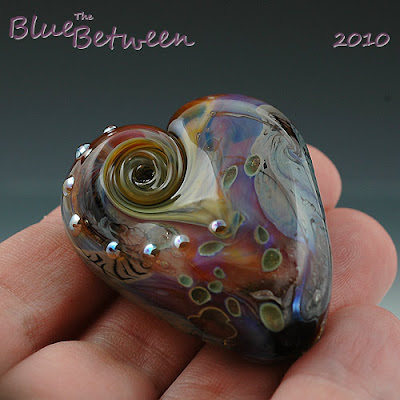 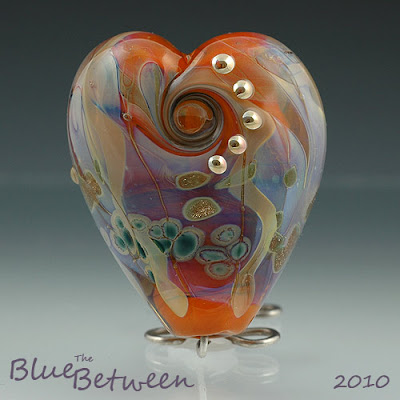 Posted by Pam @ The Blue Between at 6:50 PM 5 comments: Links to this post

My new torch arrived! It's a GTT Scorpion - the newest coolest torch out there! Isn't she beautiful? I can't wait to fire her up! 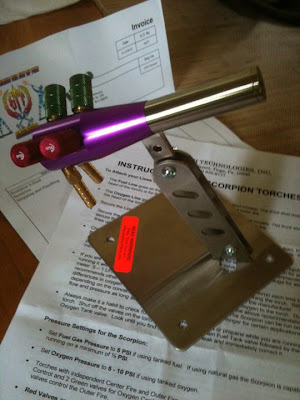 Posted by Pam @ The Blue Between at 1:28 PM 2 comments: Links to this post

A New Week, A New Bead

Or six, as it turns out. It was a very busy week, and no new beads got made, but these were finally photographed and listed on Etsy. Thanks for looking! 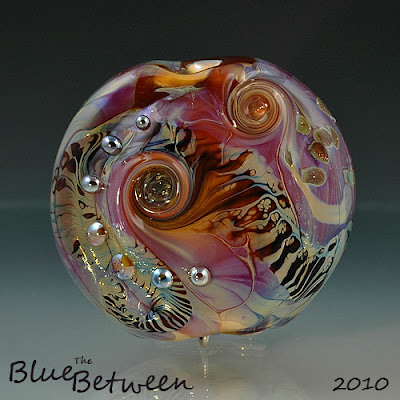 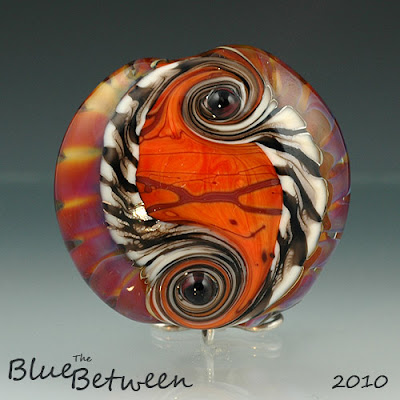 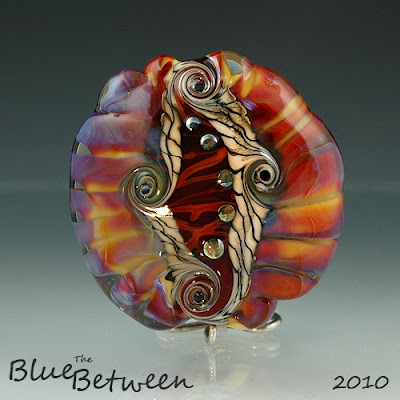 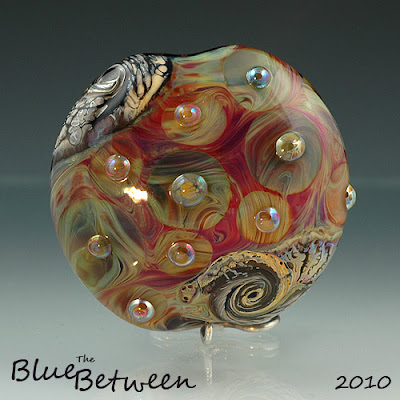 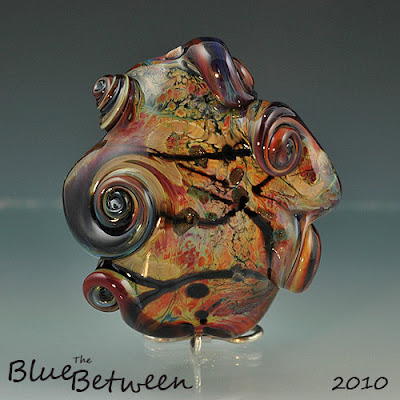 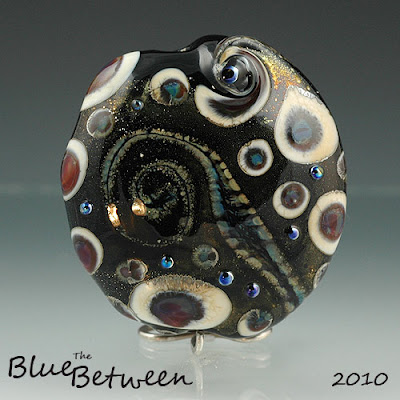 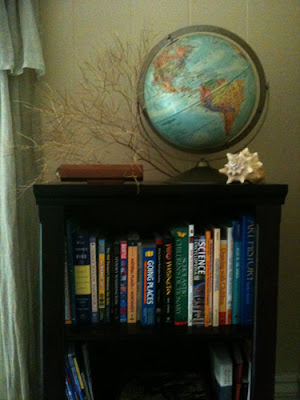 I'm talking about the list of things I said I would never do. How many things are on that list? Oh, too many to count. It’s a 10 year list, after all. What is it they say? You are a great parent before you ever have any kids? Then you have kids, and you realize you knew nothing. Nothing at all.

So... homeschooling. It wasn't my first choice - actually it was my second-to-last choice - but I'm quickly coming to terms with it and I'm starting to think it's the best choice. For now. For my kid. And it's so much better than the last choice, which was returning to one of two schools we had already tried and had not been thrilled with.

It's only been a week, but he's happy. As in: smiling and agreeable happy. Which makes me realize, his teachers have been getting the best part of my kid, and when they handed him back over to me, it was the tired and cranky kid who was not at all interested in telling me about his day. I like this child of mine much better. He asks questions, shares what he's thinking about, makes funny jokes, bounces around, hums and chants when he's doing his math... it's a whole new side of Luke.

The other cool part is that we are kind of free. Free to make our own rules about how we want to live our lives. Not sure what that really looks like yet, but it's going to include lots of field trips, ski days, and art. Sleeping in if we want to. Baking cookies or whatever else we come up with. Lots of soccer. Guitar lessons for the both of us. Travel. Plus some really fun classes at the home school resource center - right now he's taking a clay animation movie making class, and next week starts a science/literature combo class based on the book "How to Eat Fried Worms". (No worms will be fried or eaten, we have been assured.) There are Spanish classes to take, and drama productions to be a part of… lots of interesting things to choose from. Or not, because we are free to choose now.

Not that he isn’t going to be learning the regular stuff: math, reading, writing, history and science – there’s lots of that too, but I’m amazed at how quickly he gets through those things. He’s happy because he’s not sitting around waiting for the rest of the class to finish up before he can move to the next thing. And he’s happy because he got to choose Ancient Greece and Greek Mythology as a subject to learn about. I also let him choose his science subjects: magnets, electricity, energy, and weather too.

You may be wondering about one other important thing: beadmaking. It’s still going to happen! I don’t know how yet, or when, but it will. On a somewhat regular basis. This is *one thing* I’m not going to eat my words about. That is one thing that is not going on the list. There’s glass to melt after all!
Posted by Pam @ The Blue Between at 10:41 AM 1 comment: Links to this post