One of the things I was secretly excited about with the whole homeschool idea last summer... was chickens. I mentioned it to the family. I said, "Research will have to be done... we may decide that it's just too much work... but wouldn't it be cool? The best science project ever, right?" And then I bought a book on chickens and stuck it in with all of Luke's school books, hoping that he might just take the initiative and start reading and learning about them on his own. (That was another one of my secret hopes, that he would just jump into things on his own and explore them until he was done, the way I do... I'll let you know when that finally happens.)

Well the book did nothing but sit there all winter. No surprise, right? But last month we went to visit my friend Julie's chickens, and that lit the spark better than anything else could have. All he could talk about for the rest of the day was getting chickens. He pulled the book out and started telling me strange chicken facts at odd times - in the grocery store, in the car, while I was cooking dinner. A lot of them sounded too odd to be true. So I made him show me. Apparently they like to play with tennis balls? And some chickens are just decorative, not good for laying eggs. And you don't want a cross breed, you want a full breed, for the same egg laying reason. Hmn... he really was reading.

Last week, we started doing our research in earnest. This web page was pretty much the deciding factor for me - that looks pretty easy, right? Build coop, put compost bin next too it, get chickens.

(And we did more research too, but I couldn't decide where I would put them, how to keep the dog from eating them, or how to get Frank on board. At times, I thought I had two out of three obstacles solved, and then I'd either decide that was a bad location, or a bad plan, or Frank would get cold feet. Finally, I said to heck with it, it's all going to fall into place and be great! So that was that. You'll see, it's going to be GREAT! Even Frank will come around in time, right?)

So, yesterday, Luke and I got some chickens. So exciting. Meet Pippi, Lulu, and Bellatrix Lestrange: 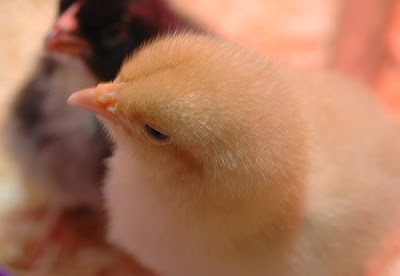 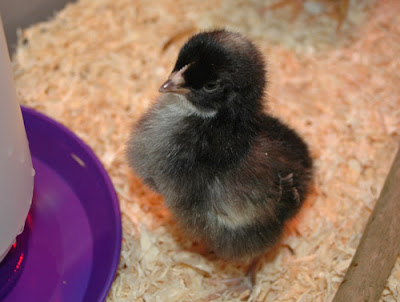 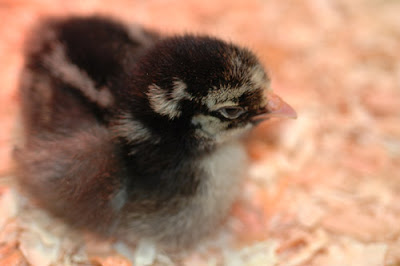 Pippi is a Buff Orpington, Lulu is a Cuckoo Maran that will lay chocolate brown eggs, and Bellatrix Lestrange is a Silver-laced Wyandotte. They are living in my livingroom right now in a big tupperware tub with a heat lamp over them. Bellatrix likes to peep at the top of her lungs. She's very, very loud. Pippi likes to push all the other chicks around. And Lulu likes to sleep plonked out flat on the bottom of the tub and we always wonder if she's still alive (she is).

Next up, clearing the spot by my studio that I want to use as their playground. Yes, they will be The Studio Chicks! And either purchasing a coop kit or building one from scratch, which looks better to me but is more work, esprecially if I don't hurry up and get Frank on board with this Great Backyard Chicken Adventure. How can he not though, they are SO cute! 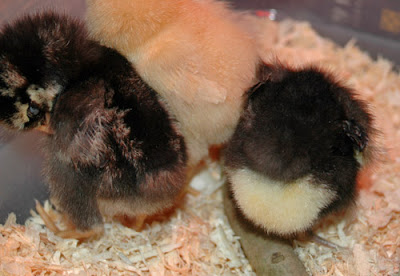 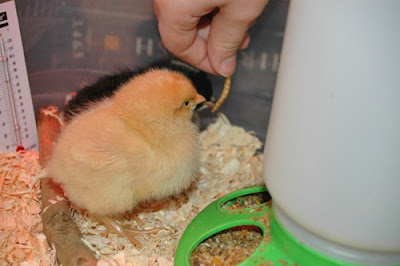 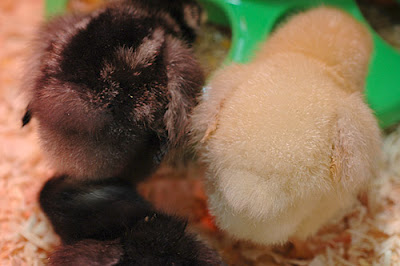