Hello! I'm back from Florida where we had a very nice and moving service for my father-in-law. The veterans came and gave him a 21 gun salute - it was so emotional. And loud! And a little bit frightening as one of the veteran's guns seemed stuck or something and he had it pointed right at us for much longer than was comfortable. But, obviously, that all worked out ok. Thank you for all the kind words about my FIL, it's such a relief for us (and him, I'm sure)... Alzheimer's is just the worst, and it's really good not to worry about him, to know he's in a better place now and free of Alzheimer's disease.

We also managed to soak up a little sun and for some reason, I'm feeling recharged and ready to take on some new projects.

I'm not finding much time for glass melting, and soccer is over so I've just lost two nights a week that I was trying to use for that. But I was thinking I could make some necklaces for the holiday shoppers. I ordered some of that nice Vintaj brass chain and clasps and I'll take some of my beads that haven't sold and make them wearable. I think the brass will look great with many of them, and it's less expensive than silver, by a lot. So, they will be affordable, and I'll be able to make them between homeschool assignments and all the other life commitments that are taking over.

Stay tuned, pictures to come! And if there is a bead you've been eying, now's the time to snag it up before I do! 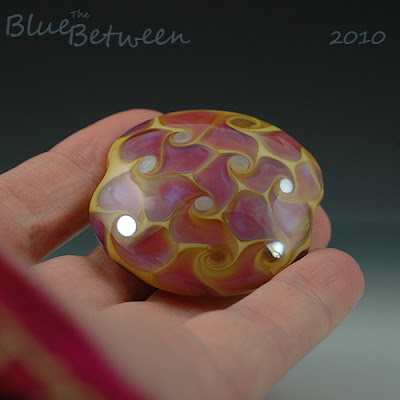