Look what I booked for a vacation next spring! Yes, thinking ahead for a change. It's going to be lovely, can't wait. Three blocks from the beach, walk to town, will have car to get around to other places. Dogs can come too. Happiness. 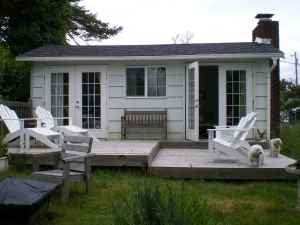 What were we thinking?

Twelve trees in front, a dead one on the side, a split and dangerous one out back and a grove of dying dogwoods... seemed like a good idea at the time. In progress though... oh, what were we thinking? My poor yard. My poor ears.

I'm trying to tell myself it's just that ugly phase before the beauty comes back, like when I paint and get to the ugly phase. Or whatever. Only it's not just another coat of paint to fix thing... this is going to be a lot of work.

Getting Ready for School

Mad rush to get everything done that needs doing before back-to-school and back-to-work starts. Of course, it's crazy, the tree people are here cutting all our trees down and so Luke and I were stuck here in case they had questions or needed something. Good thing we had a project and half - I bought a desk for him yesterday to replace his little blue toddler table and chairs (he loved them so much but is finally outgrowing them and agrees it's time for them to go). So we got that in his room, took down his baby art and put up a surfer poster and a world map and now his room is looking very grown up with lots of space to do homework and stuff. Because we hear, 2nd grade has a LOT of homework. I put a cork board behind the desk hutch too - I think that was very smart of me, don't you? Hah.

And then... the refrigerator door fell off....

Yes, the refrigerator door in the RV... fell off and hit Luke right in the face... and there went any remaining magic in "The Great Brisse Family Vacation". Gone... and you know what? We never got it back.

Luke had been wanting a slurpy from 7-11 for EVER and we promised him we'd get him one on this trip. We had just stopped and he had opened the fridge door to put some milk away when the thing just fell off and whacked him in the face. Smashed his lips and teeth. Poor kid. He's fine, but still. I'm not sure he really enjoyed that slurpy, I promised him a do-over.

Then we thought we'd stop and have dinner at the beach before heading to the next campsite (which we knew sucked, but it was the only one available on short notice), but we couldn't find a restaurant that wasn't a Casino or hotel restaurant... so we gave up that idea and just headed to the campsite.

Pulled in and oh, bad juju. But what are we to do? It's late, we are tired, the kid has been hit with a fridge door and doesn't want to go home yet... so we pull in. Get our spot, start to hook up, get bit by a gazillion mosquitos in the first half a minute, hop back in the RV and let Frank tough it out... the waste hose is too short... whatever. Dinner inside the RV because of the bugs. Look out the window and see their breeding ground behind us, no wonder. Here it is:

Go to bed and wake up to drops of rain hitting my arm, it's pouring and the skylight is up.

Hit traffic from before Aberdeen all the way through Olympia and to Tacoma.

Six hours later we are home and happy to be here.

Except, you know what? Frank and Luke think we should buy our own RV and do this all the time. Yikes. I'm outnumbered... that is for sure. Oh well, it was fun while the fun lasted. Until the refrigerator door incident at least.
Posted by Pam @ The Blue Between at 10:54 PM 2 comments:

It took FOREVER and a day to get up to Shelton from Oregon. Google said it would take 2.5 hours... it was more like... 4. Driving around in that RV makes me seasick. Or close to it. Was very happy to get out of the thing finally.

Plus, driving through this part of Washington isn't all that pretty... Willapa Bay was ok, pretty enough, but the roads were... windy and sickening in the RV. So much land in that area, and North too... is Weyerhaeuser land and mostly tree stumps, we call them stump yards. Not so nice to look at as you are driving by. No wildlife spotted either. Well, some geese and a blue heron in Willapa Bay area. A cranberry farm near the coast and "The Oyster Capital of the World" along the way. Anyway, was missing Oregon already and was temped to turn around and head back - would have, if it were not for The Bash.

The Bash is great - it's free, for starters, though you end up buying lots of glass. I should have bought more, since it's all on sale and the more you buy, the bigger the discount. I was trying to be good though. Anyway, I got lots of blues and greens because I was low on those colors. You get a free lunch too - this year it was Mexican food and very good. Last year we missed the lunch - by the time we went to get it, it was all gone - it just went fast and that's what we got for trying to avoid the line. Even better than all of that, you get to watch some really great glass makers demo some of their current bead styles. This year I watched Michael Barley make his baleen bead. Very Cool. I can't wait to try his techniques.

The best thing though, was I got to meet a couple of my online bead-making/jewelry-making friends. That was fun and I hope to get a chance to do that more often. That's me on the right, wearing my new still-favorite necklace. Angela of Blue Lagoon Beads is on the left, holding several heavy bags of glass she had already purchased and Barrie Edwards of Windermere Designs is in the middle. Check out the links to see their beautiful beads and jewelry! 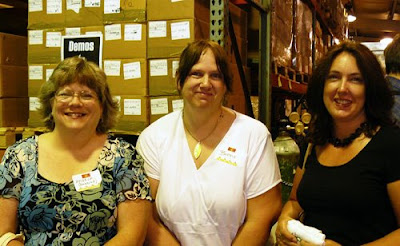 Oh, and the other best thing is the door prizes - I won one again this year - it's a gift certificate to Carlisle School of Glass Art. Yay!

Oh, you may be wondering what Frank, Luke and the dogs were doing while I was at the bash... they were supposed to be with me, and they were through lunch... but then Kesia made such a racket out in the RV (she does that) because she was mad we left her out there that they made an announcement over the loudspeaker for the owner of the RV with the "very sad and hot dog" to go take care of it. She wasn't hot - all the windows and vents and skylights were open, but she WAS barking her head off. So Frank and Luke and the dogs hung out at the RV, watching the sky-divers, playing fetch, peeing on trees (Luke) and who knows what else.

Anyway, I made it back as fast as I could and off we went to Ocean Shores.
Posted by Pam @ The Blue Between at 10:26 PM No comments:

Had to see the ocean one last time before we headed back to Washington!

Back at the Ranch

S'mores and a good roaring fire. Time to take the party cabana down and pack up so we can head out to Frantz Art Glass Bash first thing in the morning!

A Day at the Lake

Coffinbury Lake, Fort Stevens Park. What a beautiful little spot on this earth. Zoe swam for hours and I do mean hours. Mostly in circles. People would come up to me and ask if she was ok. Or how I trained her to do that. Or how come the other dog wasn't swimming too. Or... how was I going to get her out...

When I did get her out, she wasn't happy. She wanted back in, but I was afraid she was getting hypothermia. She was whining to go back in though, crazy girl.

Frank and Luke went fishing while all of this was going on. They rented a boat and headed out.

Meanwhile, Kesia was nice enough to hang out with me while I watched everyone else having fun swimming or fishing. Well, ok, neither one was really on my plan for the day, but sitting on the dock in the sun WAS.

Eventually, the boys came back from their boat ride (no fish caught) and joined me on the dock. Except by then Zoe was shivering and whining because she wanted to go back in and I wouldn't let her and I was ready to leave. However, this went on until almost dark:

Sadly, no fish were caught off the dock either. Many photos were taken though.

Back at the campsite

The party cabana tent - I figured, if I was going to do this RV camping thing, I might as well do it in style.

And here it is in full glory:

The day started to get nice - the sun came out and the light was amazing. I was sorry not to have brought my nice camera - these shots are all with my cell phone.

The skies opened up at breakfast again, but were looking hopeful after. Pancakes were the best we've ever had, aside from those blueberry pancakes Luke and I had at some little restaurant at Pike Place Market once. Yum.

Off to explore Fort Stevens State Park, across the way.